The end of a multi-year drought has created new challenges for farmers on tribal lands in Nevada, according to participants in a Climate Resilience Workshop held by Native Waters on Arid Lands (NWAL) on May 9, 2017. After above-average winter precipitation during the 2017 water year, drought conditions have given way to an excess of water in parts of the state, causing problems such as flooded fields, delayed planting schedules, and invasive weed growth.

The workshop, which was held in conjunction with Nevada FRTEP‘s Nevada Indian Summit, provided an opportunity for NWAL researchers and tribal members to share information about the impacts of the recent drought and the current winter’s water supply on traditional and production agriculture in Nevada. A full agenda for the workshop and Summit is here.

This workshop for members of Nevada tribes was the first of three climate resilience workshops that will be held by Native Waters on Arid Lands. In future months, there will also be workshops for Arizona/New Mexico tribes and Utah tribes.

RECAP OF TALKS AND DISCUSSIONS

Nina Oakley, Regional Climatologist with the Western Regional Climate Center at the Desert Research Institute, provided an overview of recent drought and precipitation patterns in Nevada.

Nevada experienced the wettest Dec-Feb conditions in a 123-year period of record during 2017, Oakley said, as atmospheric river storms dropped moisture throughout the region. At present, according to the US Drought Monitor, the state is drought-free, with only a few areas that are “abnormally dry”. 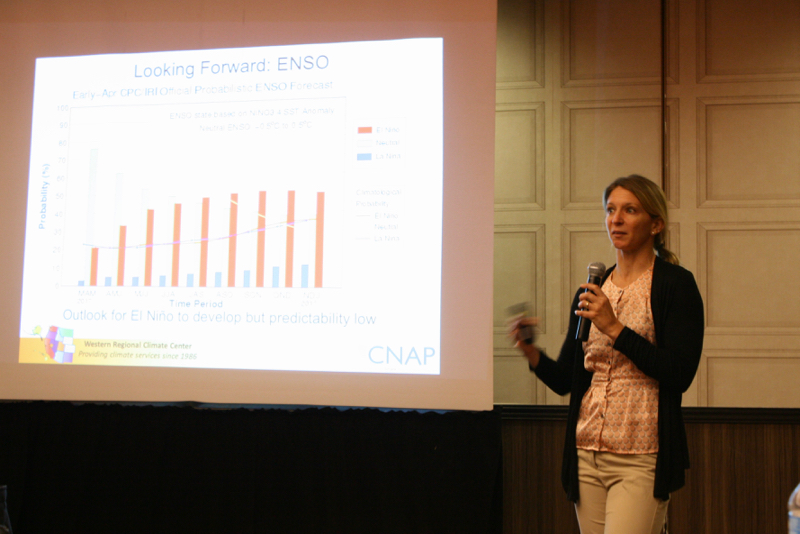 As conditions across much of Nevada have changed from very dry to very wet, impacts reported by workshop participants included:

To adapt to the climate conditions experienced during recent years, some farmers have made changes to agricultural practices, including:

Conference participants were asked to reflect on which changes worried them the most, economically and culturally. Concerns included:

Past and future climates of the Southwestern US

After the roundtable discussion, Dr. Michael Dettinger, a Senior Hydrologist with the USGS and member of the NWAL team, gave a presentation about past climates of the southwest and predictions for future change. In his talk, Dr. Dettinger provided an overview of what scientists have learned about changes in climate in the Northern Hemisphere and Great Basin over many thousands of years, including evidence of temperature changes and ancient megadroughts, with information obtained from sources like tree rings, flood sediments, sediments/microfossils, geochemistry and ice cores. 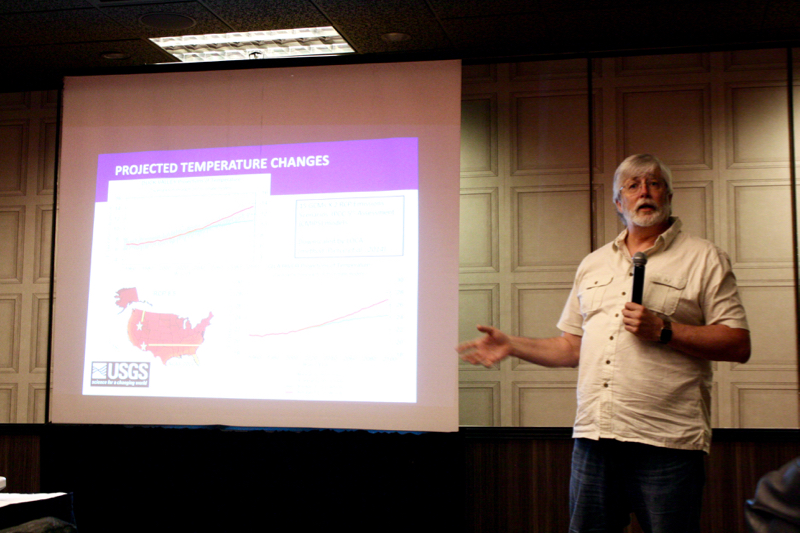 Dr. Michael Dettinger discusses past climates of the southwest and predictions for future change at NWAL’s Climate Resilience Workshop on May 9, 2017.

In recent times, CO2 levels in the earth’s atmosphere have spiked dramatically. Temperature projections show that increases of 3-9oF degrees are likely by the end of the century, Dettinger said, and scientists are already observing changes such as an increase in the amount of precipitation falling as rain (versus snow), warming temperatures, earlier snowfed streamflow, and lower snowpacks across the west. In the NWAL study area, he has created climate projections for individual reservations that show changes in temperature and precipitation through the end of the century. According to the projections, we should expect warming across the region and an increase in the range of variability of precipitation (the large storms will get larger, and the number of dry days will increase as well).

Several farmers also provided information to the research team about some of the challenges and logistics involved in growing the following crops:

Participants at the NWAL climate resilience workshop discuss challenges and adaptation strategies related to farming. May 9, 2017.

In the final roundtable discussion, NWAL team members Dr. Beverly Ramsey (Director, Earth & Ecosystems Science, DRI) and Trent Teegerstrom (Native Programs Director, University of Arizona) asked workshop participants to share thoughts about how to adapt agriculture to increasing variability of water supplies and warming temperatures. Much of the discussion focused on the use of hoop houses.

Hoop house projects have become popular on many reservations.

In closing, Beverly Ramsey encouraged workshop participants to consider attending the second annual Native American Nutrition Conference, which will be held Sept 19-20, 2017 in Prior Lake, MN. This conference is organized by Seeds of Native Health, with talks and workshops focused on native nutrition and food sciences. Beverly attended the first conference, and found it to be a very worthwhile event. Seeds of Native Health also offers scholarships to tribal members and officers. For more information, visit: http://seedsofnativehealth.org/conference/

For more information on this workshop or the Native Waters on Arid Lands program, please contact Dr. Maureen McCarthy at maureen.mccarthy@dri.edu.